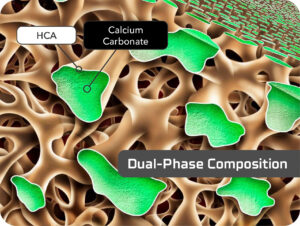 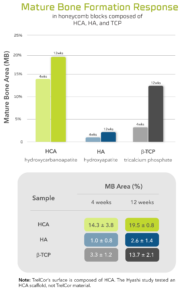 The main advantage of an HCA surface layer is that it allows for faster bone formation due to the presence of carbonate.

However, most ceramic-based bone grafts do not contain carbonate. With HCA, the initial osteoclast process is significantly accelerated due to the presence of carbonate, which makes it very similar to natural bone mineral. Bone formation on HCA-covered graft materials essentially “skips” the preparation phase seen with standard calcium phosphate ceramics, like HA and TCP. This results in faster activation of the osteoblasts1 and a faster mature bone formation process.2

A 2019 independent study evaluated the bone formation response of HCA versus two other common calcium phosphate graft materials: hydroxyapatite (HA) and tricalcium phosphate (TCP).2 All materials were fabricated with the exact same bone graft scaffold structure and implanted into a long bone defect.